To explain what is happening here, the second line of the array takes the first line and rotates it to start on the second note (C E Gb Ab) then transposes it down 4 semi-tones to start on Ab, the same idea is used to generate lines three and four. The rows are all related by transposition. Each time the array rotates the first set of notes and transposes the rotation (or spin) to start on Ab. Therefore, each row describes the same order of sequence of intervals, allowing for wraparound, but begins one note earlier than the row directly above it. The result is similar to contrapuntal compositional styles where a melody with one or more imitations of the melody are played after a given duration, this is what is known as a canon.

or in other notation

Notice that the matrix reveals an interesting property, that of rotation. If you look at the diagonal of the matrix, where Ab is populated along the following matrix elements:

To complete the elements of each row, for example to produce R2, the third row:

then rotate to the following:

and hence, R0, R1, R2, and R3 are generated by applying this procedure to all the rows.

An entire composition can be put together starting with only one chord, Abaug7, simply by cycling through the rows and applying some well-thoughtout creativity:

Once again, a strict adherence of the twelve-tone technique has been avoided.

I believe there is a balance between atonal and tonal music. In this composition, different primes are derived using the twelve-tone technique, and using transposition of primes that possess similarity with one another keeps a more tonal feel to this piece.

Starting with an initial row of:

and calculating all other primes forms, in addition to P0 I decided to include use P7. I also derived another row, lets call it P'0, and it is represented by:

Once all primes were calculated for P'0, I decided to include P'4. Why did I end up choosing P'4? Well, I'm glad you asked, that is an excellent question. It turns out that P0 = C D E F G D produces the following additional , and distinct, prime sets:

Next, I looked at each set to determine its Hamming distance with respect to P0. The Hamming distance is a measure of the distance between elements of a set (i.e. two strings, or two words, etc...) where the elements of the set are of equal length, it is the number of positions at which the corresponding symbols are different, or put another way, it measures the minimum number of substitutions required to change one string into the other. To calculate the Hamming distance the following equation is used:

where dHAD is the Hamming distance between the objects i and j. k represents the index of the respective variable reading y out of the total number of variables n. The Hamming distance, dHAD, gives the number of mismatches between the variables paired by k. For example, If I take two words "road" and "toad", there exists only one letter substitution to turn "road" in to "toad", that is, to substitute the "r" into a "t", a Hamming distance equal to 1. Likewise, if I take two strings of letters (or notes), such as P0 and P5, there are six substitutions necessary to turn P0 into P5.

It turns out that all the primes generated (i.e. P5, P7, P8, and P10) from P0 all have a Hamming distance equal to 6. I then decided to take the row that did not contain any sharps, and hence, trying to stay more like to the original sequence, P0. Note, since all primes have retain the same interval structure, and only the notes (or frequencies) are different, then I ended up taking the least varied row by choosing P7.

You will notice that I have connected each prime motif with runs of scales or variations of smaller motifs.

The Italian sixth (i.e. dominant seventh with no fifth) will usually resolve to a dominant chord, this is done by resolving the leading tones to the dominant, then completing the resolved chord by adding the two appropriate tones, in this case the dominant is a G and the two added tones are B and D. Here is the augmented sixth:

This piece turned out to sound ethereal, make sure to play this piece very slowly and with a lot of connection, or flow, between the notes.

The use of a fifth, D to A, and augmented sixths are used to create a piece with a slight dissonance being created next to the fifth by adding a semi-tone in the appropriate locations, and consonance created by resolving augmented sixth chords. The inspiration of this piece came from thinking about the universe, and in particular the star cluster Pleiades. For some reason I associate this type of tune with objects in the universe. Here is a nice image of Pleiades for your own personal inspiration: 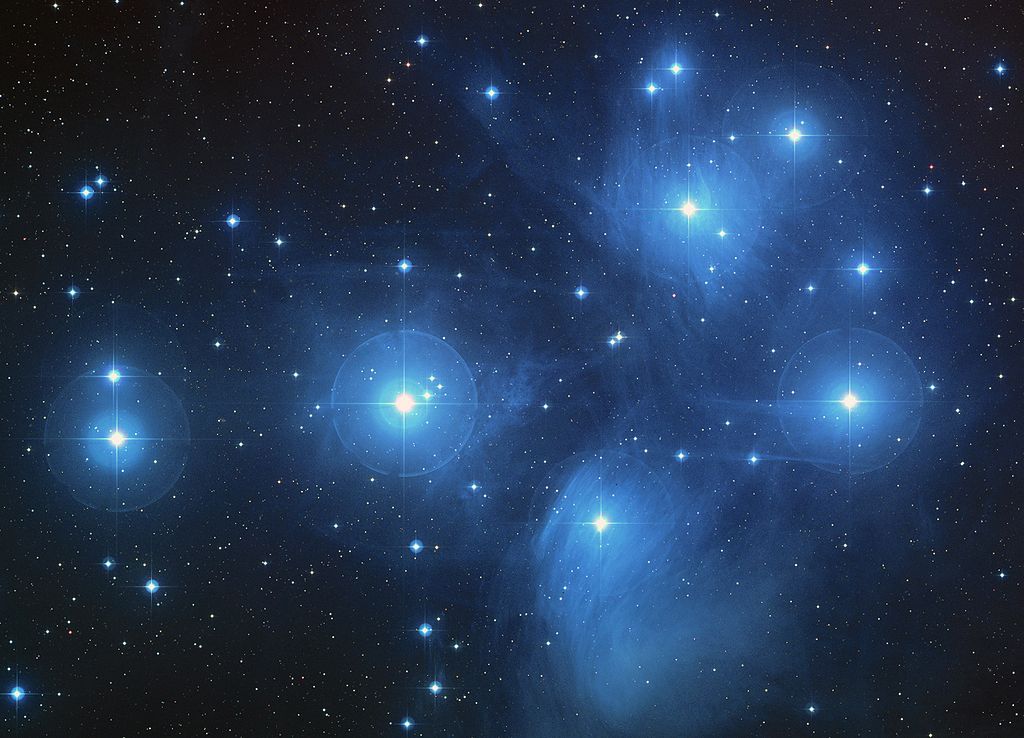 Please note that the augmented sixths used in this piece are created from two different scales, A major and D major, but I just see it as an application of the use of the chromatic scale splashed with a bit of atonality.

Play this piece with intensity.

The following chord vectors are used, where Mi,j are the respective matrix elements:

Notice that the first element of each chord vector (CV) marches through the chromatic scale, starting on CV1 = Bb and ending on CV1''' = A. Each row of the circulant matrix represents one row of music. One a set of Mi,j's have transversed the rows of the matrix (i.e. CV1, CV2, and CV3), then the next set of Mi,j's are applied until all chord vectors have been used.

Note that this piece ends on an augmented 4th for a truly unresolved sound.

This composition uses a sequence of numbers that can be interpreted as musical intervals: Fibonacci Numbers and the Golden Ratio. Composers such as Chopin, Mozart, Beethoven, and Bartok have been known to use these numbers and their properties of symmetry to compose music. I will derive the set of Fibonacci numbers, then create the Pisano Period (the period where the sequence of Fibonacci numbers, modulo n, repeats). I will use this sequence of numbers to create the intervals between pitch frequencies to derive a composition.

The sequence of Fibonacci numbers is defined as follows:

There are many interesting properties of Fibonacci numbers. One very interesting property of this sequence is that if a Fibonacci number is divided by its immediate predecessor in the sequence, the quotient approximates φ; e.g., 13/8 = 1.6250, which is an approximation of the Golden Ratio. I will concentrate on a certain property of the Fibonacci sequence that involves transforming the sequence, modulo n, to obtain a periodic structure that will be used in creating intervals. This periodic sequence is called the Pisano Period. For example: for n = 3, that is modulo 3, the above Fibonacci numbers translate to:

It can been seen that a repeating pattern starts to emerge: 0, 1, 1, 2, 0, 2, 2, 1. It will be this periodic sequence that will define a set of intervals to be used in construction of a composition.

Play this piece with speed and energy.

The observation of a particular ratio, the Golden Ratio, in nature (and duplicated by the human) is not just coincidental. The Golden Ratio is equal to 1.618... and is used frequently in geometry. Phidias (circa 450 BC) the great painter and sculptor used the golden ratio in his work. Fibonacci (1170–1250) created the numerical series now named after him; the ratio of sequential elements of the Fibonacci sequence approaches the golden ratio asymptotically. The golden ratio is used in architecture (Parthenon's facade), painting (Leonardo da Vinci's illustrations of polyhedra in De divina proportione), book design, finance (trading algorithms), music (Bartok, Chopin, Wolfe, etc...), Egyptian pyramids, and observed in nature (atomic scale in the magnetic resonance of spins in cobalt niobate crystals).

I thought it might be interesting to relate the Golden Ratio to the tonal frequency, not just the ratio of the intervals between notes or regions of a motif in a piece. The following table displays the note and its associated frequency:

The next step is to determine some golden-chords, or chords made of minor sixth intervals, so that I can create some three-note chords to manipulate using the twelve-tone technique. These particular three-note chords will be derived by constraining the intervals betweens tone to be that of the Golden Ratio. The chord is derived by taking the ratio 1.618 and multiplying it by the tone frequency. For example A is associated with F, which in turn is associated with C#. The following table displays these chords:

Note that every interval is now the Golden Ratio equivalent and can now be used to compose a piece of music. If you take any one of these chords and try to build each chord by continuing the 1.6 rule, it will become apparent that the chord actually has a periodic structure to it. For example, if the chord, A F C#, is to be made into a tetra-chord by adding another tone, it will eventually wrap around on itself: "A" is to "F" and "F" is to "C#", but "C#" is to "A", and "A" is to "F". As you can see, this is the case for all these chords. This is quite interesting, and represents a sort-of symmetry structure to these chords.

I decided to calculate the primes, inverses, retrogrades, and retrograde inverses from the following set:

I choose to use only the prime and retrograde inverse to derive the following piece. There are obviously many variations that can be produced.

Play this piece slow and gracefully, yet with some intensity.