We are going to compose a short piece of music, then extend the music by adding symmetry relations. This will allow us to create a tonal-atonal-tonal structure.  In particular, we will be using a Klein four-group, from the field of group theory.  The Klein four-group has some very interesting properties that can be directly applied to music composition. Namely, symmetry operations via permutations.  We will define the Klein four-group, then give an example of how this group can be used to compose a piece of music by extending a short motif.  The Klein four-group is also directly related to how the twelve-tone technique is operated on with permutations when composing atonal music, but we will leave this discussion for a later date. 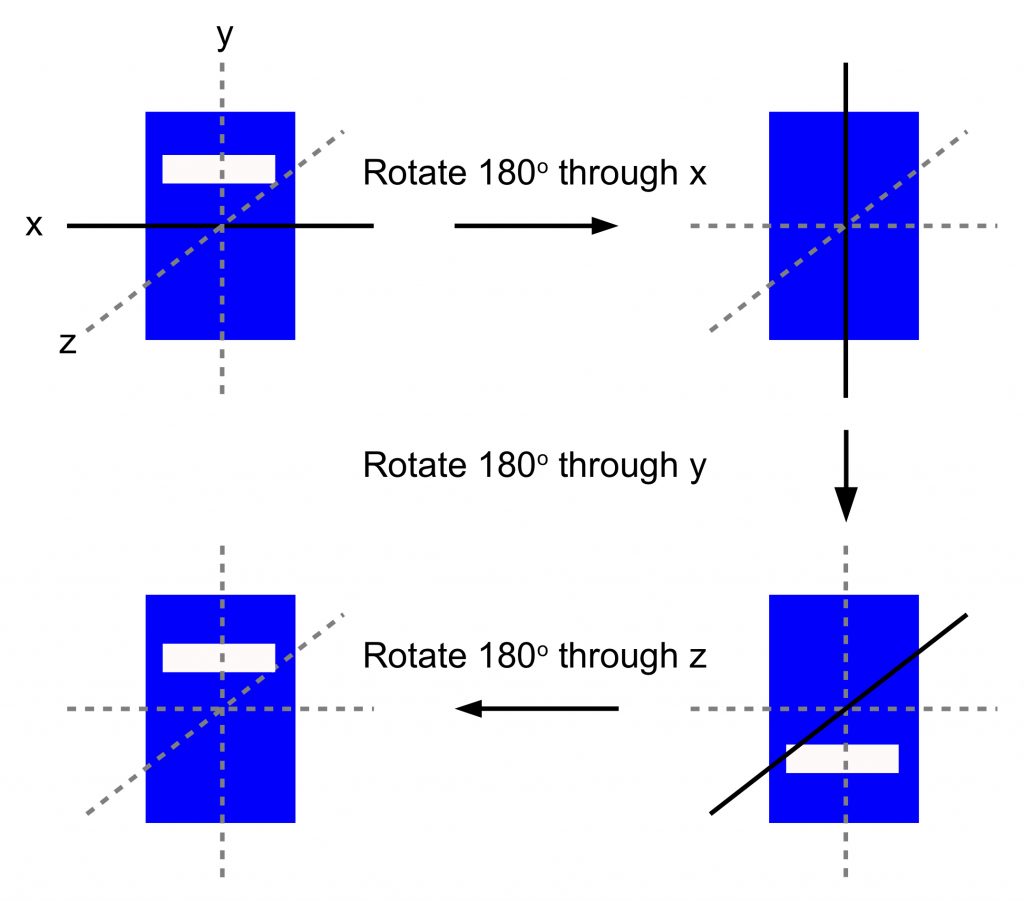 These operation take the book back to its original state.  You have just mapped out the rotation operations of a Klein four-group.  Now, lets compose a small piece of music.  We will being with a melody that follows the rules of fourth species counterpoint.  That is, where two notes are written in the counterpoint to every note in the canto fermo, with the exception of the first and last notes.  In keeping to the rules of fourth species counterpoint, the first measure of the counterpoint will contain a half-rest, and the last measure will contain a note of equal value to the cantus firmus.  The first note of the counterpoint music be a perfect concord, and the second note of each following measure must be either a perfect or imperfect concord.  These concords are syncopated, or suspended, into the following measure.  The first note of each measure is usually tied to the second note of the preceding measure, and is most often a discord.  This prepared discord must resolve by falling one degree into a concord.  However, if the syncopated note in a concord, then we can move it by skip.  Note: I believe fourth species counterpoint represents the most beautiful of all species counterpoint.

Now, lets extend this piece using our knowledge of the Klein four-group, and apply some rotations to our fourth species counterpoint.  Before we do this, lets say that our rotations as described above correspond to the following rules:

Our sequence for the above piece can be written as two parts, the counterpoint (top part) and the cantus firmus (bottom part):

Then, lets take the inverse of the two original sequences:

We will also take the reverse of the inverted sequences.  Notice that taking the inverse of the original sequence will yield a slightly different sequence.  The follow represent the reversed inversion rotation of the top and bottom:

Remember, these operation are done with respect to “C” being the pivot point of the inversions, so “C” will not change in any of  these operations, likewise, if we had an F#, it would not chance either.  Now, lets extend our sequence, and at this point, for purely artistic reasons, we will slightly break the rules of counterpoint.  We will transpose the top sequence, and leave the bottom sequence alone, these sequence are then written as follows:

We have now accomplished our rotations and are ready to extend our original piece.  To notice where we slightly broke the rules of counterpoint, in the fourth measure (see below), instead of going down by a step using a half-note, we proceed downward by quarter-notes until we reach the A#.  We are not really breaking the rules, just extending them.  If you notice, what we have done is broken the key, we started in the key of C and now we are in some other key.  With the A# and G#, you might say we are in B-major.  However, what are doing is going from a diatonic set, C-major, into an atonal set, chromatic in nature.  We first rotated through x by taking the reverse of the sequence, then rotating through y and inverting.  Then we rotated through z by performing the reverse of the inversion, with a slight twist of the transposition, T10 on the top sequence.  Here is our piece after applying one rotation:

Pretty interesting.  However, it doesn’t really sound complete.  Even though we have journeyed into the land of atonality, this piece can still sound more complete and resolved.  Look at the last section, where we have the B in the second-to-the-last measure suspending over into a concord, G#- B, a minor third, in the last measure.  This is fine, in fact with this type of suspension, it is a nice concord, totally acceptable counterpoint.  However, the A# presents a bit of an issue, that is, a G#- A# constitutes a minor second, and this is a discord.  So, we are breaking the counterpoint rules a bit.  For the next step we simply transpose the bottom reverse-inverted to T2, thus making this sequence read A B C#.  Then, we take our final rotation back to the original sequence, C D E, and extending the from the middle out, to D E.  The last five measures follow standard fourth species counterpoint.  Here is the final piece of music:

By using the Klein four-group, performing rotations, and adding a few variations, we allowed ourselves some rules to follow, and break a few too, but we were able to compose an interesting piece of music that could be called quasi-tonal, meaning the piece contains tonal and atonal motifs.  These motifs, albeit small examples, can be extended in other directions to create a larger or more complex piece.  I hope this sample shows how following a set of rules and constraints can produce a piece of music that oscillates between tonal and atonal structure.

1 thought on “Fourth Species Counterpoint and the Klein Four-Group”